SGP laminated oversized glass is composed of at least two panes of tempered glass by SGP film. It has a much higher thermal shock resistance than float laminated glass.

When the pane breaks, the small fragments with blunt edges generally remain stuck to the SGP film. It is difficult to pierce the film, which considerably reduce the risk of injury. 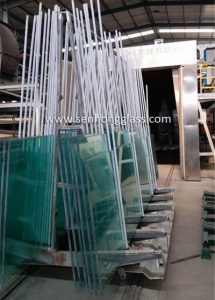