Toughened laminated glass is composed of at least two panes of tempered glass by PVB or SGP film. It has a much higher thermal shock resistance than float laminated glass.

When the pane breaks, the small fragments with blunt edges generally remain stuck to the PVB or SGP film. It is difficult to pierce the film, which considerably reduce the risk of injury. 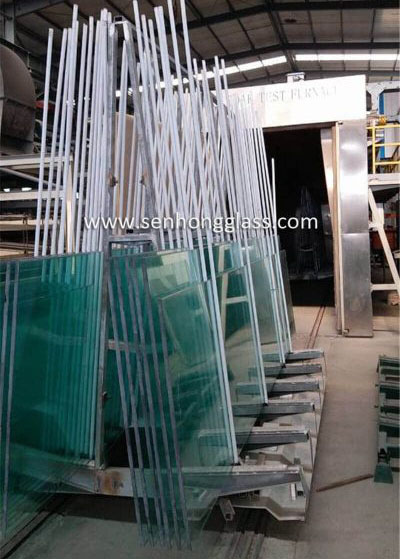 1. SGP laminated glass has a high bonding ability to glass and strong tear strength, which can prevent the glass from breaking and scattering.

2. SGP laminated glass has a strong protective ability which can prevent natural disasters and human damage, and it has sufficient resistance to hurricane, earthquakes, violence, theft, etc.

3. SGP laminated glass can withstand the sudden impact, which can prevent the glass from shattering or the whole out and avoid people and articles flying out and falling.

5. SGP laminated glass can either bear greater loads or – at the same load – can be reduced in glass thickness without compromising safety.

6. SGP laminated glass is much less vulnerable to moisture exposure or yellowing over time.